“They’re baaaack.”  That’s right, the same guys that spearheaded the RAA I (“Ride Across America I”) three years ago, Bob McCullough, Joe Geivett and Carl Forsberg are headed out on RAA II, this time the Northern Route across America. 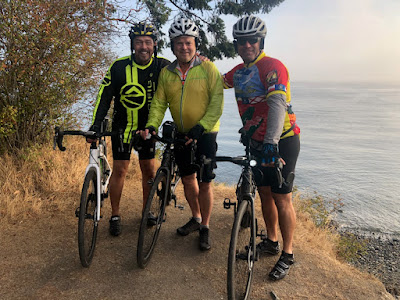 As you may recall, in August 2018 this group rode from San Diego, California to St. Augustine, Florida over 27 days, with a rest day in Austin, Texas.  RAA I was about 3,055 miles.  RAA II (who’s idea was this anyway, Bob?) is from Anacortes, Washington to Bar Harbor, Maine, our route is 4,251 miles.  One never has an appreciation for how much wider America is on its Northern border than its Southern border – until you map a bicycle route.  Due to scheduling considerations (the “vocation” as opposed to the “avocation”), we will ride from Anacortes to Minneapolis, Minnesota this year and pick back up in Minneapolis and ride to Bar Harbor this time next year.  (We hope to get a spectacular “New England Fall.”)  The first leg of RAA II is about 1,937 miles.  We will (hopefully) complete this route in 17 days.

After scouting the route over three days this spring and selecting our September 7 start date, the day after Labor Day, we determined that the first day, Anacortes to Ross Lake Overlook (an approximate 104-mile leg with about 5,000 feet of elevation gain – most of it in the last 10 miles!) should be ridden early, to avoid any leftover Labor Day traffic.  Thus, we completed the first leg of the RAA II on August 10th.  This early first leg also allowed us to break in our new equipment and our new driver, Steve “Scuba” Miska, a very good friend of ours from up at the lake.  Steve graciously agreed to be this year’s (and next year’s?  C’mon Steve, it will be fun …) driver.  We are again using Joe’s supremely outfitted Mercedes Sprinter Van, which has a few more miles on it since RAA I, as Joe regularly allows others to use the van for ski trips, day hikes, bicycle tours and “Hey I’m 21, pub runs.”  We will miss our RAA I driver, mechanic, barber and counselor, Keenan Leary, but it would not be prudent for him to take a long break from his new job in San Francisco just to console us at the end of a long day’s ride.

Our first day’s approximate 104-mile trek up to the Ross Lake Overlook was scenic and a leisurely ride after dipping our back wheels in the Pacific Ocean in Anacortes, Washington at about 7:00 a.m.  On August 10 we avoided most of the early morning traffic (less traffic we fear due to the pandemic) and after riding through several very picturesque neighborhoods with immaculate landscaping, we set about a brisk pace onto Hwy. 20. 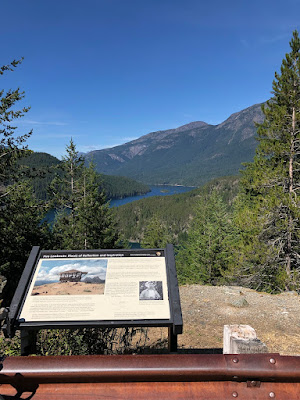 We were blessed with absolutely no mechanicals throughout the day and except for temperatures that were a little warmer than normal for this time of year, 85°, with no headwind, the weather was also perfect for our day one RAA II ride.

Now to the point for recalling the RAA I Baptist Church count, one of our Day 1 photos is prophetic. As we were riding through one of the small towns outside of Anacortes we passed by this Baptist Church, that’s right folks, it literally says, “First Baptist Church.”  From this sign we determined that our decision to undertake RAA II had divine intervention.  Thanks for following Bob, Joe and Carl’s next epic adventure.

September 09, 2021
Day 3   Omak to Colville Another very big day:   116 miles and a 9,000-foot gain in elevation with most of this gain in the elevation occurring in miles 80-90 towards the end of the day (just when you thought the day couldn't get any tougher, oh yeah, “Here’s a huge, steep climb to end the day!”) Road Conditions:   We went from 3-foot shoulders with a “rumble strip” to 18 inch shoulders with no rumble strip to no shoulders!   And we have included here photos of some of the machinery going up the mountain passes right next to us – not for the faint of heart! Today’s weather:   We had it all today, a little rain in the morning out of Omak and then the day progressed to about 88° from Noon on, going into Colville.  Air quality from the fires was 151.  Oh, and we had near 15 mph headwinds for some of the mountain ascents and descents.  Some of these headwinds pushed us sideways while descending at near and above 40 mph.   Today’s story is about the ride, it was a very tough d
Read more
September 08, 2021
Day 2   Ross Dam Overlook to Okanogan   Pre day-2 discussion; Bob email to Joe and I:   “Surprise, our total elevation gain is over 8,000 feet, our estimated elevation gain was 1,600 feet off!  2,500 feet in 10 miles between miles 70-80.  Super steep!  Oh, and FYI, Wednesday is close to 9,000 elevation gain, not the 7,000 we had charted …”   Joe’s response, “Good to know Bob.”   105 miles; over 8,000 feet of elevation gain!  Tough, tough day in the saddle; this was one of the top 20 hardest centuries we have ridden and among the top 10 most beautiful.  Stunning vistas, truly a magnificent highway (Hwy. 20; which closes for about 4-5 months a year due to 20(+) foot snowfalls!  We encountered some smoke from long away forest fires and we saw tremendous damage from recent forest fires in the Okanogan National Forest.  Very sad, this forest will not likely come back in our lifetime. We had beautiful, well-maintained roads, with little shoulder but for the most part very courteous drivers.
Read more