Today’s first 25 miles of cycling began with some traffic and narrow shoulders.  From there the traffic and shoulders go progressively worse.  After some “white knuckle” riding we decided to portage (twice) to appease some of the Idaho drivers.  (After a quick vote, Idaho drivers get the “worst etiquette / least favorite state to ride in.”)  We don’t want to bash all Idaho drivers, perhaps the 10 or 11 that let us know of their displeasure with cyclists were just having a bad day?  To be clear, we are riding on several marked bicycle routes across America.  We are riding the Northern route, legitimate “Route 10,” which is one of about seven different routes which begin on the coast and literally go across America from there.  And, we drove this route last October (thinking the pandemic would be over in the Spring and we could ride then).  All of this said, we were surprised with today’s route by very narrow highway shoulders and at times, heavier than we recalled traffic.  As a result, we thought it better to portage for sections of the day’s ride.  Some of the photos here are from the portages / we tried to show the shoulder and traffic issues in these photos. 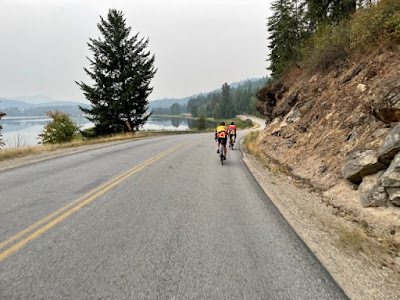 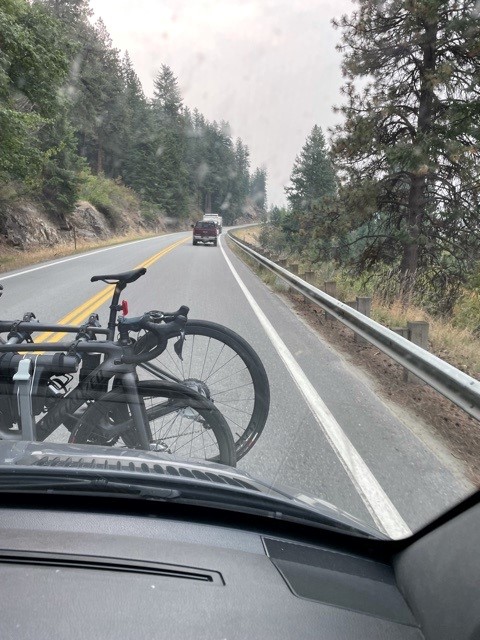 During our early morning ride we encountered wild turkeys everywhere.  On a few occasions as soon as we turned a corner there would be a “flock?” of turkeys right in the middle of the road!  I had never seen a wild turkey before so that was a treat. 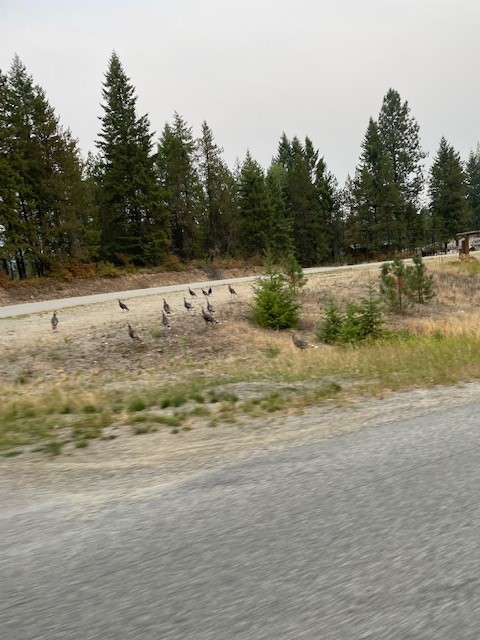 One of the other photos here is of the sun through the trees at about 10:00 a.m. in Idaho.  As you can see, the sun is red from the “smoke haze” we rode in all day.  Today’s smoke seemed to be worse than yesterday.

We rode in a dusty haze throughout the day.  When we reached Sandpoint, Idaho we were treated to 15 or so miles of riding on a fantastic bike trail.  Sandpoint is a very bicycle friendly area.  After Sandpoint we were on highways with little traffic but no shoulder.  We kept far right out of the way of passing traffic.  Most folks, likely used to bicyclists on Route 10, were courteous and shared the road, some not so much.  We tried to do our best as “bicycling ambassadors” following the rules of the road.

Late in the day, at about 92 miles into our ride, we were in a tight pace line averaging about 20-21 mph when a fairly new (sticker still in the rear window …) Jeep Cherokee passed us on the left when all of the sudden we heard a loud bang.  We next heard a flapping sound coming from the Cherokee and looked back to see the the driver had hit a deer – that deer, like the one that passed just in front of Bob yesterday, would have hit our pace line if the Jeep Cherokee had not been in the exact spot at that time.  Later, on our way to dinner, we spotted probably 14-15 deer grazing on the roadside.  The deer population in Idaho / Montana is large and the drivers are vigilant to avoid these encounters, especially at dusk.

Today we crossed over into Montana.  Usually we get a photo at the boarder crossing sign but today all we saw was a spray-painted line on the roadway. 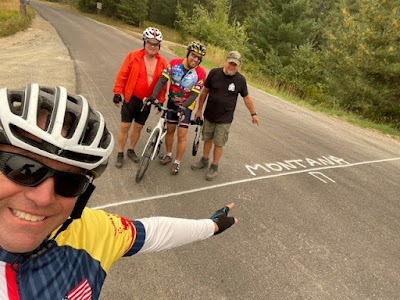 After we crossed the line, we stopped to refill water bottles and we saw an Idaho mail truck deliver to the last house in Idaho (about six feet off the line!) and then pulled a u-turn – this scene gave us all a chuckle.