80(+) miles / 5,000(+) feet of elevation gain; many 6-8 grade climbs, few 16 grade (real, real steep!)  [Think of those yellow truck warning signs at the top of a hill with a black truck pictured descending with a warning for a 6% grade!  Some of these climbs were almost three times that grade – this truly was the “going to the sun” road!] 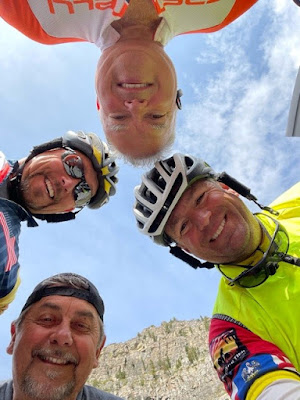 Glacier National Park, MT, just outside of Whitefish, MT, was commissioned in 1910 or so and this road was built in the 1930’s.  This road is still considered one of the engineering feats in our nation’s history!  For those of you who enjoy the outdoors or viewing the overwhelming vastness of huge, panoramic vistas, this place is a must see on your bucket list.  It is hard to describe the majesty of mountain views and riding your bicycle among those peaks which were etched millions of years ago by glacial movement.  You feel very small but part of a much bigger picture for this universe when you are in this National Park. 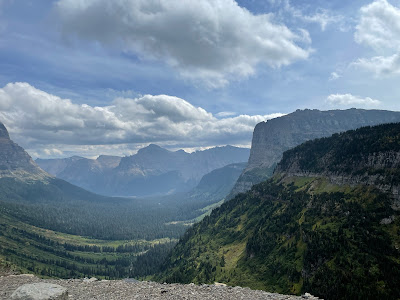 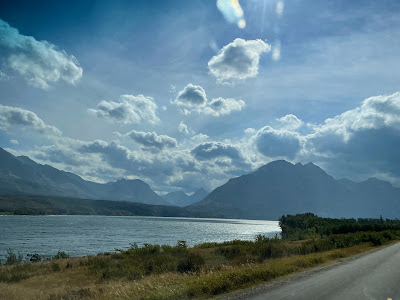 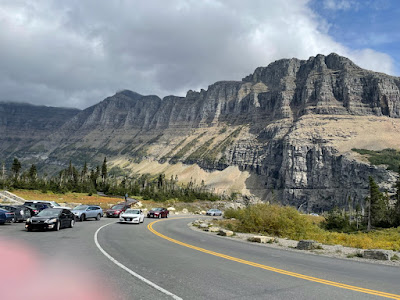 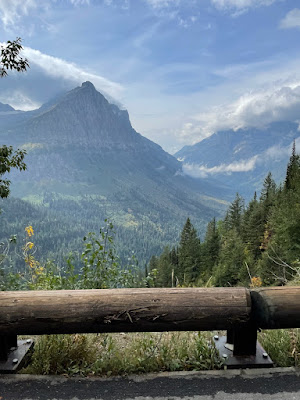 After about 45 miles of riding on populated roads up to the Park, the three of us climbed in a fairly tight group all day – to be courteous to the drivers, so they only had to pass three cyclists once, not single cyclists three times.  Early this morning we were freezing, prior to getting into the Park on our way there.  It was very cold and there was a bit of a headwind, about 45° when we started but with winds and our 18-20 mph speed it seemed much colder.  We stopped early in the day to don warmer gear and gloves!  Afterwards, the pace was brisk but very manageable with few cars in the road early Sunday morning.

We encountered about 16-20 deer, in groups of 1’s and 2’s on our way to the Park.  At one point a deer trotted off to the side of the road from our right and then attempted to gently “nudge / nose” Bob and then just stood there as we passed by.  Perfect start to a perfect riding day.  Right as we entered Glacier National Park on the bike path / sidewalk, there was huge pile of “bear scat.”  This pile was large and these Grizzly Bears are so big, we decided to document the fact that we were riding through real bear country … alas, that pile of poo was the only evidence we saw of any Grizzly’s all day long. 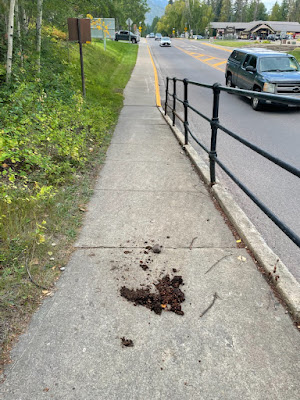 We were not treated to much wildlife adventure on today’s ride through the Park, but the magnificent vistas more than made up for not seeing any Grizzly Bear or other wildlife.  We have attempted to chronicle, in photos, the beauty that we were treated to in today’s ride.  The ride was one of the toughest climbs we have enjoyed together but well worth the effort.

Joe’s “bike fix” yesterday must have worked as he led out most of the way up the mountain!  He remarked on several occasions how he just felt better / stronger with a straightened derailer and front sprocket crank set.  At one point when we rounded a corner Joe said, “See that roadway up there?  That’s where we are going – ”  I thought he was joking and that he was pointing to an old mining road or railroad tracks way up the mountain side – two hours later I learned that he wasn’t kidding. 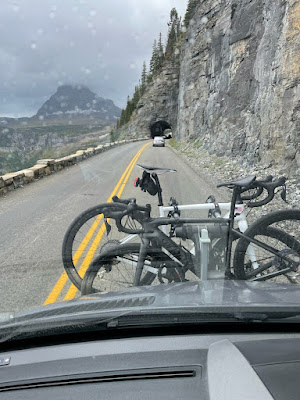 Folks, picture this for the road on the ascent of the mountain side:  one side (for us the oncoming traffic lane), had no shoulder and a sheer cliff wall that came down to the road surface.  Then, for our lane going up the mountain (the outside lane), there is about a 12-18” shoulder and then an approximate 24” rock wall – and after that, the great abyss below, several hundred to several thousand feet down.  Thankfully the drivers on the road were very courteous and respectful of our space and our journey up the mountain.

The beauty and majesty of this Park is well worth the trip to Whitefish, MT.  Today was as near perfect a riding day as can be imagined – we will come back to this Park for future rides!